Richard Rynearson grew up in Washington State as a military dependent. After completing an undergraduate degree he entered the military himself. He spent twenty years as a pilot in a time of war flying a variety of aircraft including the AC-130U Gunship and the MQ-9 Reaper for Air Force Special Operations Command. Rynearson amassed more than 1000 combat flight hours in operations in Kosovo, Afghanistan, and Iraq. For a mission on the first night of the Iraq invasion he was awarded the Distinguished Flying Cross for heroism. Rynearson is married. His wife is a Harvard graduate, Air Force JAG, and former law clerk for a justice of the Supreme Court of the United States.


Unlike Clarence Moriwaki, Rynearson's government service rarely involved politics. But official documents make it exceedingly clear that Rynearson's public service was a hallmark example of fidelity to the oath of office, to "support and defend the Constitution of the United States against all enemies, foreign and domestic." While in the service, Rynearson was outspoken on the necessity of military officers to understand and honor their oaths of office even if it meant losing their careers. He ran and personally funded $1000 college essay contests for cadets, focusing on topics that would encourage future officers to think about their oaths to the Constitution.

As an active duty military officer, he was vocal about domestic threats to the Constitution and publicly and repeatedly condemned the NDAA of 2012 that legalized military indefinite detention of American citizens in America without charge or trial. Beyond mere words, when given an unconstitutional order to assassinate an American citizen outside a war zone, without charge or trial, who did not present an imminent threat, Rynearson refused the order as unlawful. Maj Rynearson then tendered his signed resignation, just five years before a pension and health care for life, rather than violate the rights of an American citizen. Rynearson was a vocal critic of those in the military who failed in their obligations to the public.

Clarence Moriwaki and others would later research and discover this order and would characterize Rynearson's refusal of it to Judge Sara McCulloch, as evidence that Rynearson was "anti-government" and as reason Rynearson should be censored, disarmed, excluded from portions of his own private property, and excluded from some public events and areas of Bainbridge Island, including from the Bainbridge Island Japanese American Exclusion Memorial. 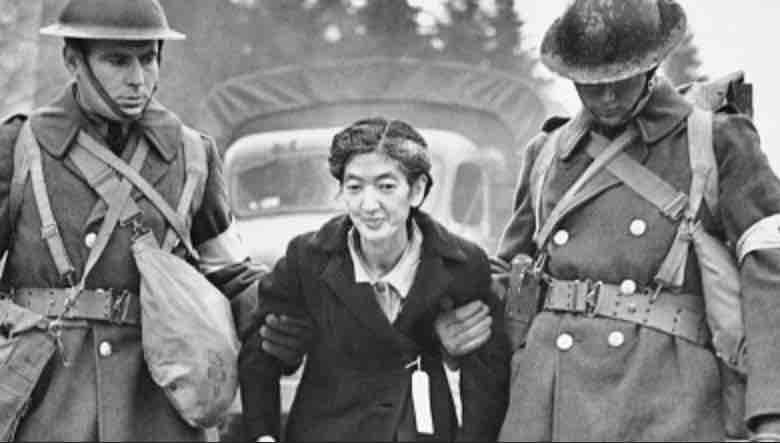 Rynearson's resignation was not accepted, however, and subsequent efforts to revoke his security clearances failed. Instead the United States Air Force ruled in favor of Rynearson and stated that Rynearson "chose resignation over obeying the order given" and that Rynearson's multiple letters of reprimand, including one for refusing the order, were due to the fact that Major Rynearson was "fully aware of the U.S. Constitution" and "openly challenged what he perceives to be a violation of either his own rights or those of other American citizens."

During a security investigation interview associated with that process, another pilot in the squadron described Rynearson to investigators, saying he:

...has a good work ethic and holds very strong views and opinions, which he readily expresses. [Maj Rynearson] has particularly strong views about the Constitution...

Major Rynearson's retirement after twenty years elicited similar comments from his superiors, peers, and subordinates. One stated, "I always had great respect for you because you are not afraid to challenge the things that are wrong in society." Another described Rynearson as "a great American" and another dubbed him "one of [the] finest military officers to have ever served." Another individual stated:


Rick, I mean this with all sincerity. You are truly an unsung hero and more courageous than anyone I know.

Major Rynearson's service outside the cockpit was further testament to his fidelity to the oath of office and included a lawsuit he filed against the Border Patrol for its near-border practices. Rynearson lost the suit against the federal government, with a single dissent from Judge Jennifer Elrod Walker who wrote:

Firm assertions of one’s rights are far from 'unorthodox' in a Republic that insists constitutional rights are worth insisting upon and that tasks the courts with protecting those rights.

At great personal expense, Rynearson appealed the decision to the United States Supreme Court, but that body declined to hear his case.

In December of 2017, the American Civil Liberties Union (ACLU) flew Rynearson to Washington DC to give testimony before Congress. There Representative Juan Vargas of California apologized to Rynearson "on behalf of the federal government" for the actions of the Border Patrol. Rynearson later penned an op-ed with DACA recipient, Jesus Daniel Mendez Carbajal, about their experiences with checkpoints in border communities.

Clarence Moriwaki characterized Rynearson's lawsuit against the Border Patrol to Judge Sara McCulloch as further evidence that Rynearson should be censored and excluded, painting him as "anti-government." 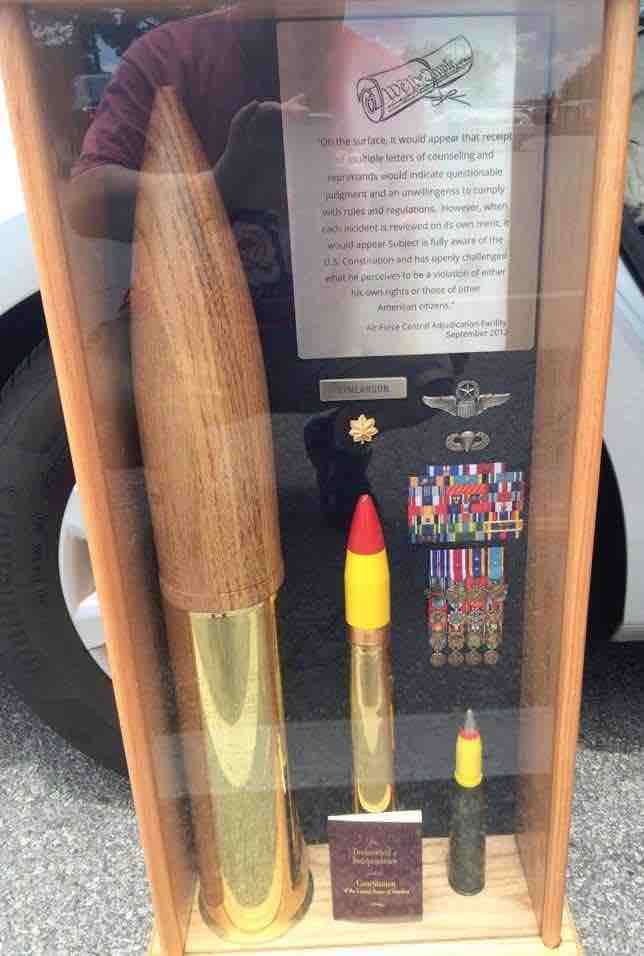 After retiring from the military and moving to Bainbridge Island, Rynearson and his wife joined the Cedars Unitarian Universalist Church, and Rynearson joined the William Renton Lodge No. 29 of Free and Accepted Masons. Rynearson and his wife became full time college students in nearby Seattle, utilizing the GI Bill, until he was forced to leave the island by the order from Judge Sara McCulloch that was later ruled a violation of the Constitution.

Rynearson was victorious in Moriwaki v. Rynearson and Judge Sara McCulloch's order was vacated and ruled "unconstitutional" for violating the First Amendment's free speech protections. Rynearson also succesfully sued in federal court and got our State's cyberstalking law knocked down as unconstitutional in the federal suit Rynearson v. Ferguson which was supported by the ACLU of Washington and the Electronic Frontier Foundation and argued pro bono by UCLA law professor, and First Amendment scholar, Eugene Volokh. Still Rynearson and his wife face an uphill battle in our community which is far from a courtroom with rules of evidence. 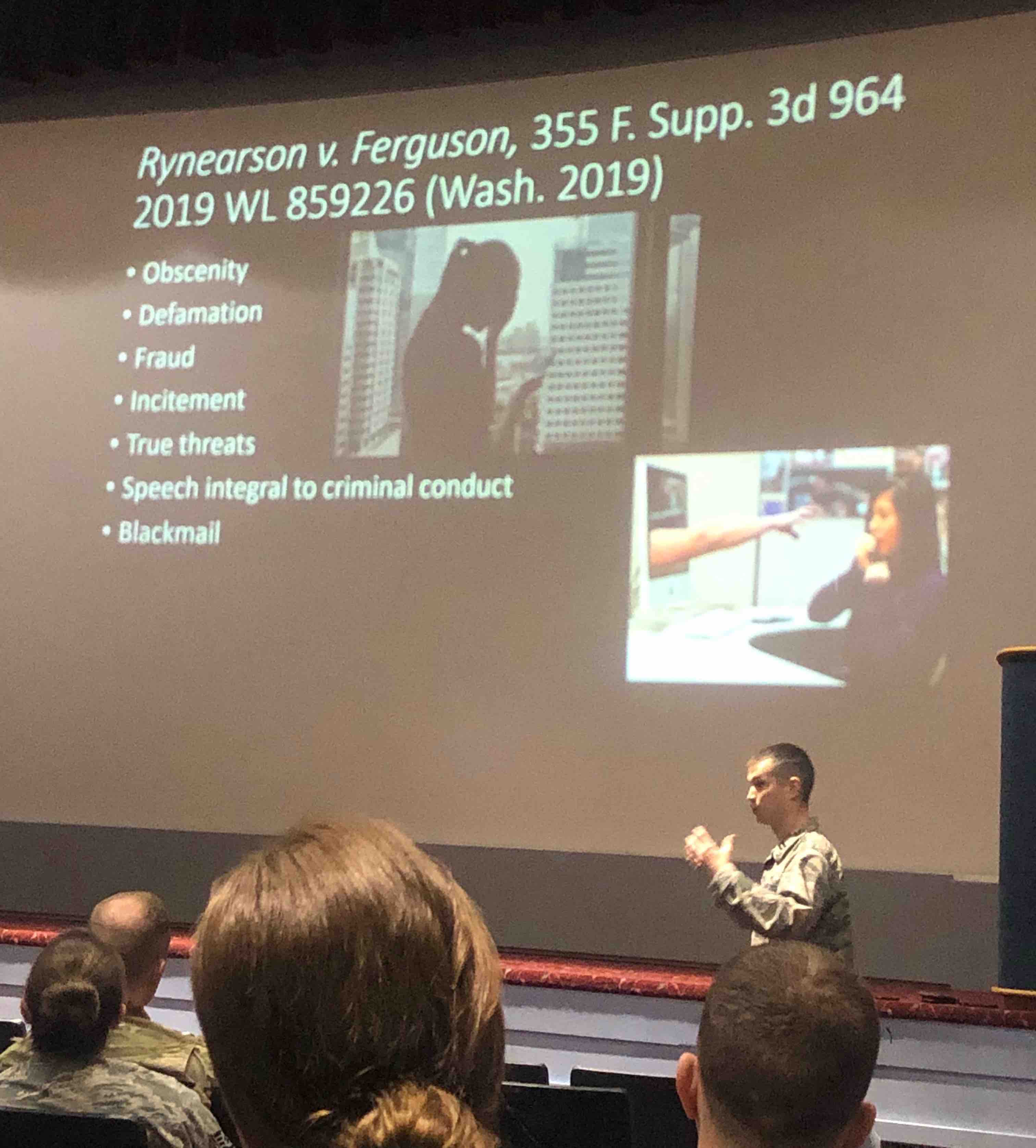 Rynearson's victory is briefed to service members at McChord AFB

Rynearson and his wife continue to face death threats and an intolerant and hateful mob in their efforts to move back to their home on Bainbridge Island.